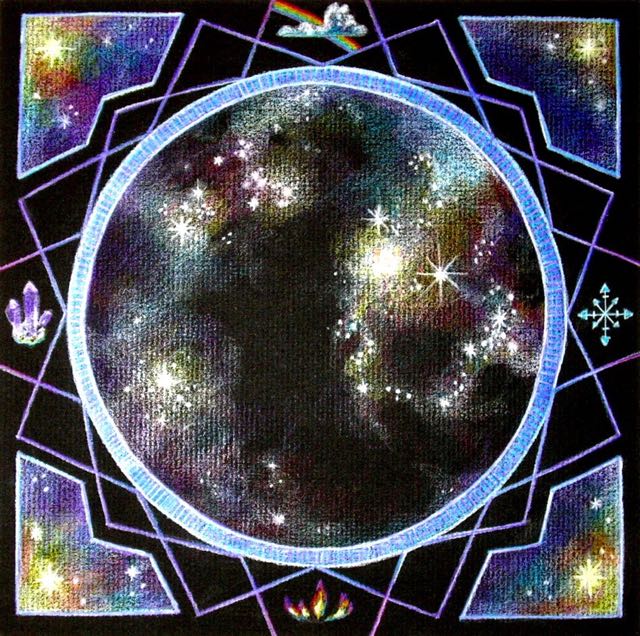 Story
​
It was the summer of 2009 and my son, David, was visiting from New York City. One morning he greeted me with eager eyes and said, “Mom, you have to play this video game with me!”

Now David knows I missed out on the video game gene, but he was insistent.  “It will be good for you, Mom. Seriously, this game is the coolest thing E.V.E.R. You have to play it with me! Come on…. I’ll help you. You’re gonna love it!” He gave me that conspiratorial grin that has gotten me into more than one adventure with him.
How could I resist? I had no idea my reality was about to be turned upside down.

The game we played was called Portal (a 2007 puzzle-platform game developed and published by Valve). It is a mind-twisting puzzle game that alters physics and bends reality. You play as a character who is stuck in a room with no obvious way out, and you are given two portal guns to get out of the box. One gun creates an exit and the other creates a corresponding entrance. You might place a portal in a wall and another in the ceiling, then as you enter the wall, left becomes right, up becomes down, and you fall through the ceiling where you can now discover a way out of the box. Puzzle solved!

David put the controls in my hands. I made it 30 minutes before nausea overwhelmed me. After a rest, I tried again, but my mind became completely discombobulated. Trying to console me, David grinned and said, “I think your brain is just being reprogrammed.” I believe my classic response involved some sort of finger gesture. He was lucky. I was too sick to chase after him as he danced away, giggling.

I didn’t want to admit it, but his comment actually ignited my curiosity. How exactly was I being rewired? A part of me wanted to quit, but a bigger part was urging me on into discovery. I sensed there was something important unfolding.

When my world finally stopped spinning, I went back to give the game one more go, but I didn’t last long. This time, instead of heading back to bed, I went outside and sprawled on the grass.

I laid there for a long time, comforted by the smell of the lawn and my view of fluffy summer clouds. As I relaxed into a meditative state, I asked for the solution to my nauseating dilemma.

The answer dropped right in out of the blue. It was short and sweet: “Be the portal.”

I had no idea what that meant.

Again the voice in my head told me, “Be the portal, not the player. Don’t try to figure out the puzzle from inside the game. Be the portal through which the solution comes.”

Intrigued, I went back inside and told David I wanted to try again. This time I gave the controls to him and focused my awareness inside the portals he created. Like magic, my world settled, and we actually finished the game! High fives all around.

Basking in the glow of my victory, I wolfed down my imaginary “Portal Cake” and listened to GLaDOS, the computer system nemesis, reminisce with me about all the fun we had playing together. His droll computer-generated voice reminded me of the numerous times he pretended to murder me so that I could reflect on my clever escapes.  Good times.
​
Yet despite my gleeful sense of victory, something still gnawed at me. I knew the hint to “be the portal” was important, but I did not yet understand what the portal actually represented, or how necessary “being it” would become. 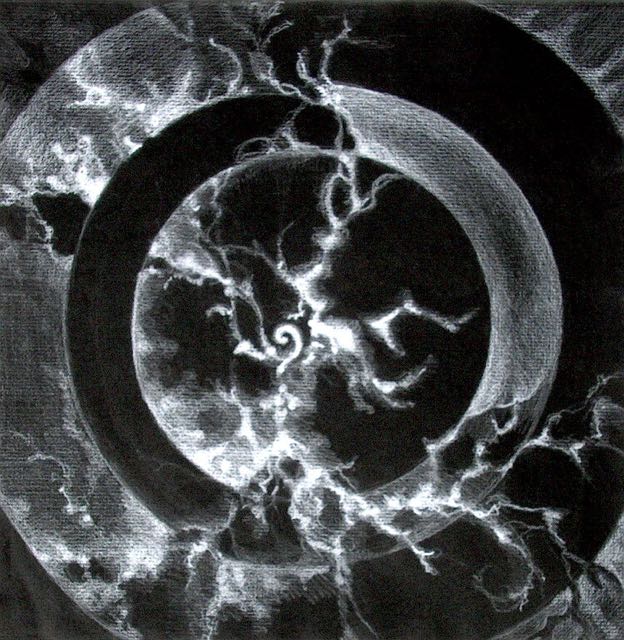 Not long after playing Portal, my life spiraled into chaos mirroring to perfection the topsy-turvy game. It was an ironic twist of fate. In a few months I became homeless and jobless (at my own hands no less) and was spinning in an avalanche of change. I had no freaking clue what to do next, except hide in seclusion like a wounded animal and suck my paws in misery. I'd completely forgotten the "be the portal" message. But fortunately, a friend serendipitously called to remind me.

“I just had this really amazing dream about you,” my friend gushed. “Guess what you were in my dream? You will never ever guess. Oh, you are just gong to love this!”

I highly doubted I’d love anything she had to say, such was my misery, but I urged her to continue.

Time stood still as I pondered this fate-filled statement.

“Yes! You were a portal. You were holding this safe space for change and transformation. All these people were coming to sit inside your energy field. It was amazing! I just had to call and tell you.”

In stunned disbelief, I pumped her for more information. “What was the portal? How did it work? What did I do?” (Oh, please, please, PLEASE tell me what I am supposed to do…)

After a pause she confessed, “That is all I know. I’m so sorry. I can’t tell you any more.”
And that was that. She had delivered my wake-up call. Some assembly would now be required to become this portal thing, whatever it was. Time to end the pity party.

As I navigated through the chaos of following months, I realized quite quickly that my mind was not my friend. Evolution was now a necessity, and yet my mind kept stubbornly looking in the rear view mirror at the pile of debris in my wake. It had a death grip on the past and everything that had not worked, as well as a deep fear about what what would happen in the future. None of this was helping me create a new reality.

When cows return home to the barn at night, I’ve heard they generally follow well-worn paths. My thoughts, I discovered, were rather like cows and they had worn deep paths into my psyche. They returned to certain memories, generally painful ones, that fed certain stories and beliefs, and these created a reinforcing cycle of probability.
​ 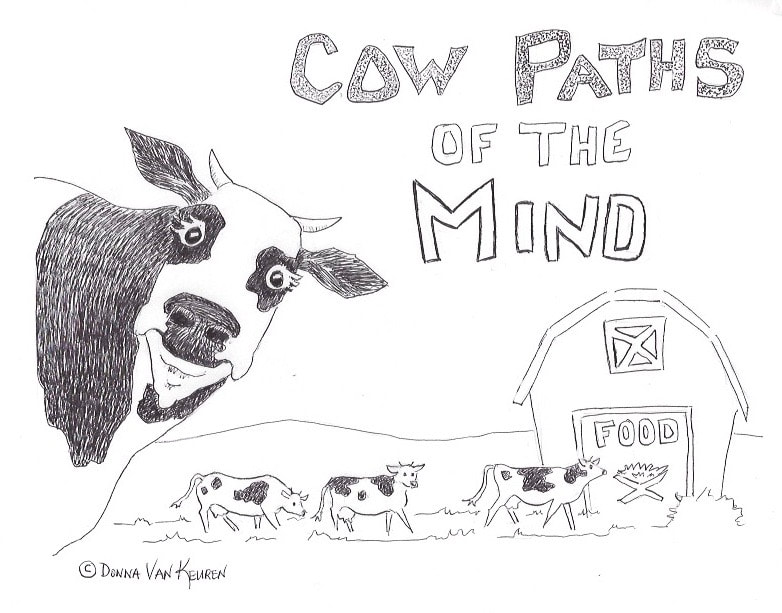 Here is another analogy that sums my experience up perfectly. Have you ever been mountain biking? Mountain biking trails are bumpy messy things that are filled with holes and rocks and unexpected surprises. I always focused on the rocks and holes in a feverish  attempt to protect myself, but I learned pretty quickly that my tires always went right where I was looking.  By focusing on my fears, I was pulling them right into my reality. My mind really wanted to help me, truly it did, but it just didn’t have the right skillsets. It had built certain paths of thought that were keeping me in the old patterns.

My mind was deathly afraid of the present moment.

My breakthrough came, oddly enough, by discovering the paradox of quantum physics. Though I am not a scientist and understood very little of the technicalities, I found myself inexplicably drawn to its mysteries. When I first learned of the Double Slit Experiment (http://www.thekeyboard.org.uk/Quantum%20mechanics.htm). I was fascinated.

In this experiment, scientists shone light through two slits onto a wall. The results revealed that light behaved as both a wave and as particles. Unobserved, the light took on a wave form and would shine through both slits simultaneously creating an interference pattern of alternate dark and light bands on the wall behind. However, if the scientists watched the light move through the slits, the light would condense into particles. Each particle would go through only one slit producing two separate areas of light directly behind the slits. The scientists concluded that the presence of an observer directly impacted the results of the experiment! Observation collapsed the photon wave into particles and created a discreet outcome. Without observation, all the possibilities were held in a wave of potential.

Eureka! This suggested a way out of my dilemma.All of my personal potentials existed simultaneously in the now moment just like waves of light, and what I chose to focus upon would collapse these potentials into a reality that I could experience. This is exactly what my mountain biking adventures revealed. My bike went exactly where I was looking, AND my fear-based focus was unfortunately preventing me from seeing other more benevolent possibilities.

Now, those other possibilities were still there in wave form, and in my current circumstances I could sense my soul nudging me to “glance over there” even if only for a second. “Just look away, look left.”
​
Seems simple right? How hard can it be to glance to the left? But if you are screaming down the path at 90 miles per hour, motivated by pain, anger, fear, and a compelling story of being the victim, and the potential accident that lay ahead is dramatic and terrifying, and I really really REALLY wanted to stare at it in fascinated horror, well then, looking to the left was a mighty feat. 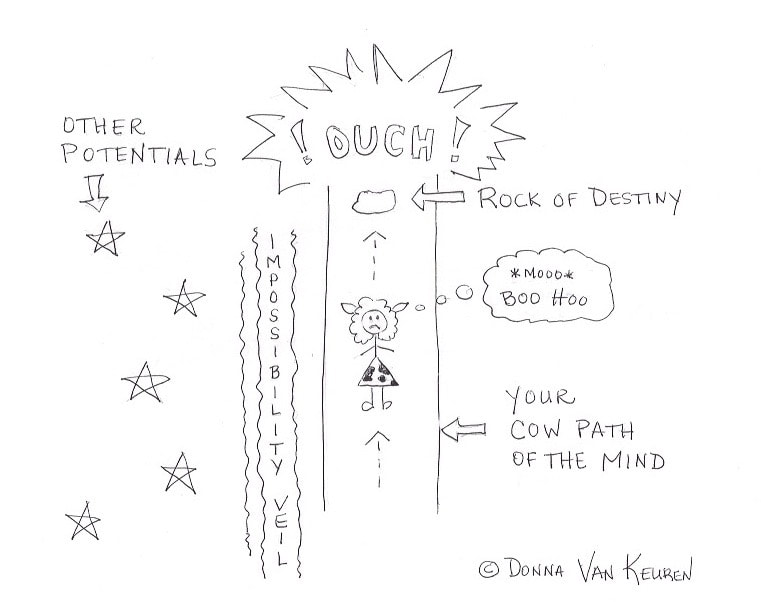 "Won't I crash? Shouldn’t I slow down first? Don’t I need to watch the rock to avoid the forthcoming disaster?”

Nope. That always led to a face-first collision with the rock. A fear-based focus was a self-fulfilling prophecy.
However, if I looked away, my actions would naturally follow my gaze. If I kept looking there my energy would eventually re-arrange to meet my expectation.
​
I wanted to experience a grander kind of life where I loved being alive and life loved me back. I wanted to run somewhere where I would find this magnificent outcome waiting for me, but I had the uncomfortable knowingness that creating this was an inside job. I had to look inside myself and see what I wanted to see there, then the outside world could rearrange to reflect that back to me. A million dramatic stories were demanding my attention, but only I could choose where I put my awareness. No one could do this for me. I sensed a more elegant and rewarding life was possible, I just had to love myself enough to believe I deserved it and then focus my awareness upon that choice.
​ 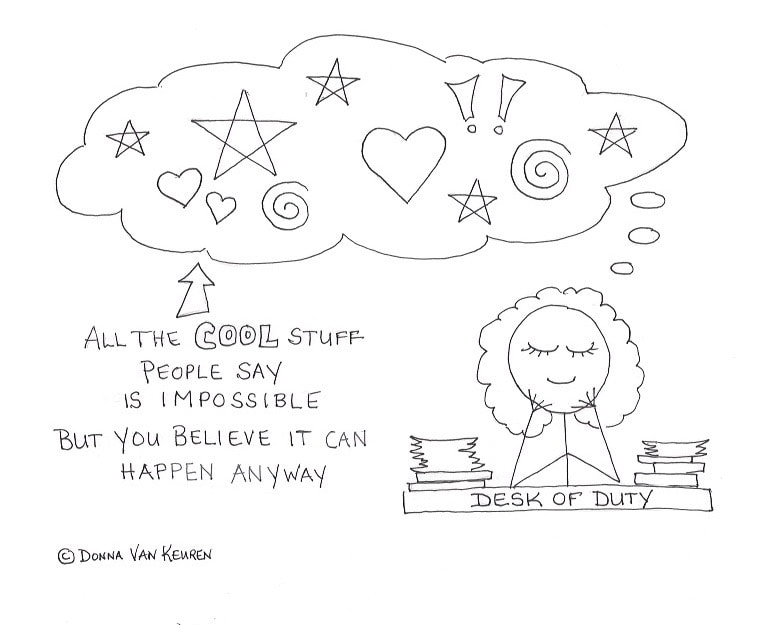 ​This shift of perspective is what “being the portal” is all about! This combination of present moment awareness and higher understanding began to recreate my life. Instead of reacting to my life from old conditioning, I started responding in new ways. In the stories that follow, I share all the playful and poetic ways that I was guided out of my personal prison and taught how to dream a new reality into form.

Portal Perspective - Be the point of awareness in the present moment.
​
Key to Success - What we look at, and how we choose to perceive it,
creates our reality.
Light the Journey, 30402 Hilltop Drive, Evergreen CO 80439 Donna Van Keuren Joe Davinroy